First Street Foundation’s study indicates Houston is the U.S. city with the greatest number of properties at flood risk now. A new NOAA report points to the growing threat of high-tide flooding along the Texas Gulf Coast. 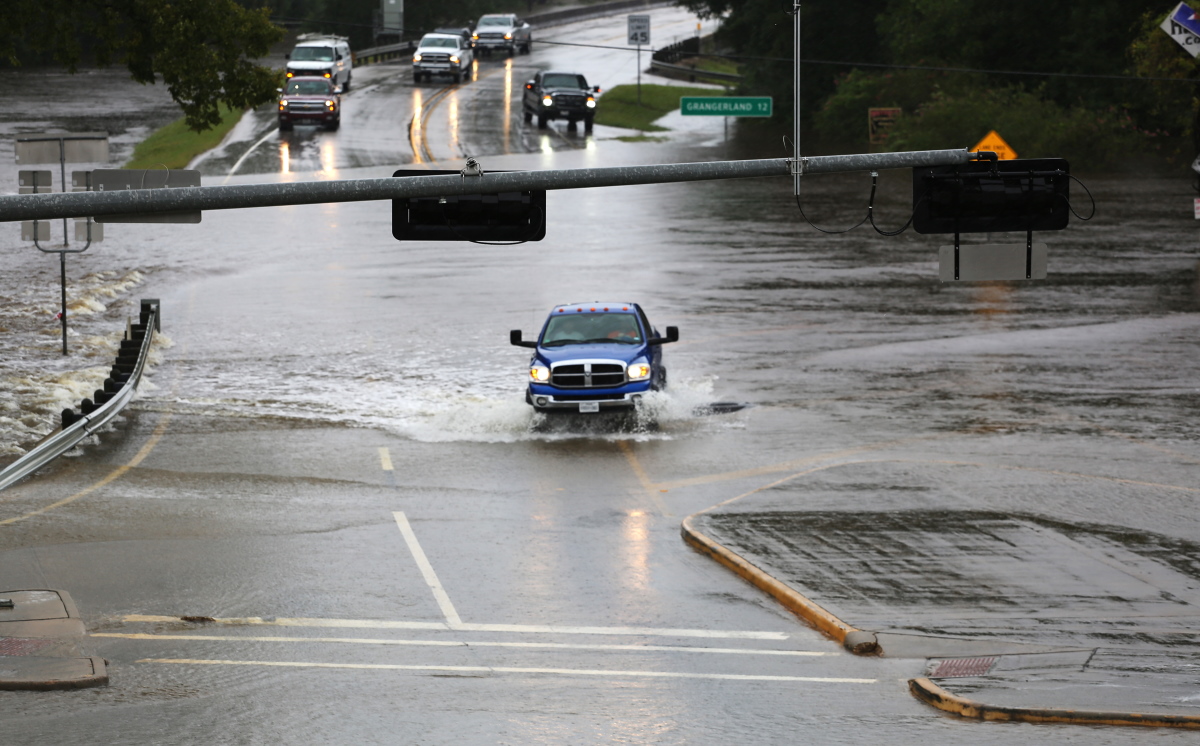 Texans have been reminded again and again in recent years that floods can be a major, hazardous part of Lone Star living. Two recent national reports show that risk is increasing. Their statistics help flesh out scientists’ warnings that climate change will cause more and worse flooding in Texas.

In one of the reports, the nonprofit First Street Foundation said projections using its new, climate-adjusted, flood model indicate 1,150,900 properties in Texas now have “substantial risk” of flooding, a number that will grow by 15.9 percent, to 1,333,700 properties, over the next 30 years.

Compared with what federal officials now count, First Street’s model shows 70 percent more properties across the country – including 30 percent more properties in Texas – are at “substantial risk.” The First Street numbers are higher, the foundation said, because it uses “current climate data, maps precipitation as a stand-alone risk, and includes areas that (the Federal Emergency Management Agency, or FEMA) has not mapped.”

The First Street model, developed by experts at consulting firms and universities, incorporates changing environmental factors and looks at “any type of flooding event,” including river, rainfall, storm-surge and tidal flooding.

The second recent report was the annual appraisal by the National Oceanic and Atmospheric Administration of high-tide flooding – a phenomenon fueled by rising sea levels that is also called sunny-day flooding and nuisance flooding.

NOAA said high-tide flooding in 2019 had occurred with “extraordinary” frequency, especially compared to instances at the same locations just 20 years ago. Monitoring sites on the Texas coast recorded particularly notable numbers among the records set at Gulf locations for their numbers of days with high-tide flooding.

Five of NOAA’s seven tide gauges in Texas broke those locations’ records for days with high-tide flooding – Morgan’s Point, Eagle Point and Galveston’s Pier 21 in Galveston Bay; Corpus Christi on the central Texas coast; and Post Isabel on the Laguna Madre near the southern tip of the state.

High-tide coastal flooding “will continue to grow in extent, frequency, and depth as sea levels continue to rise over the coming years and decades,” NOAA’s report warned.

The First Street report, which addressed all kinds of flooding, included projections showing locations along the upper and central Texas coastlines will experience the state’s largest increases from 2020-50 in the number of properties at “substantial” flooding risk.

Virtually all of the rest of the state was also projected to see increases in properties at “substantial” risk (defined by First Street as at least a 1 percent annual chance of flooding of at least one centimeter, or 0.4 inch).

Increases in at-risk properties elsewhere in Texas are expected to be much smaller than in coastal areas subject to tidal and storm-surge flooding worsened by sea-level rise. 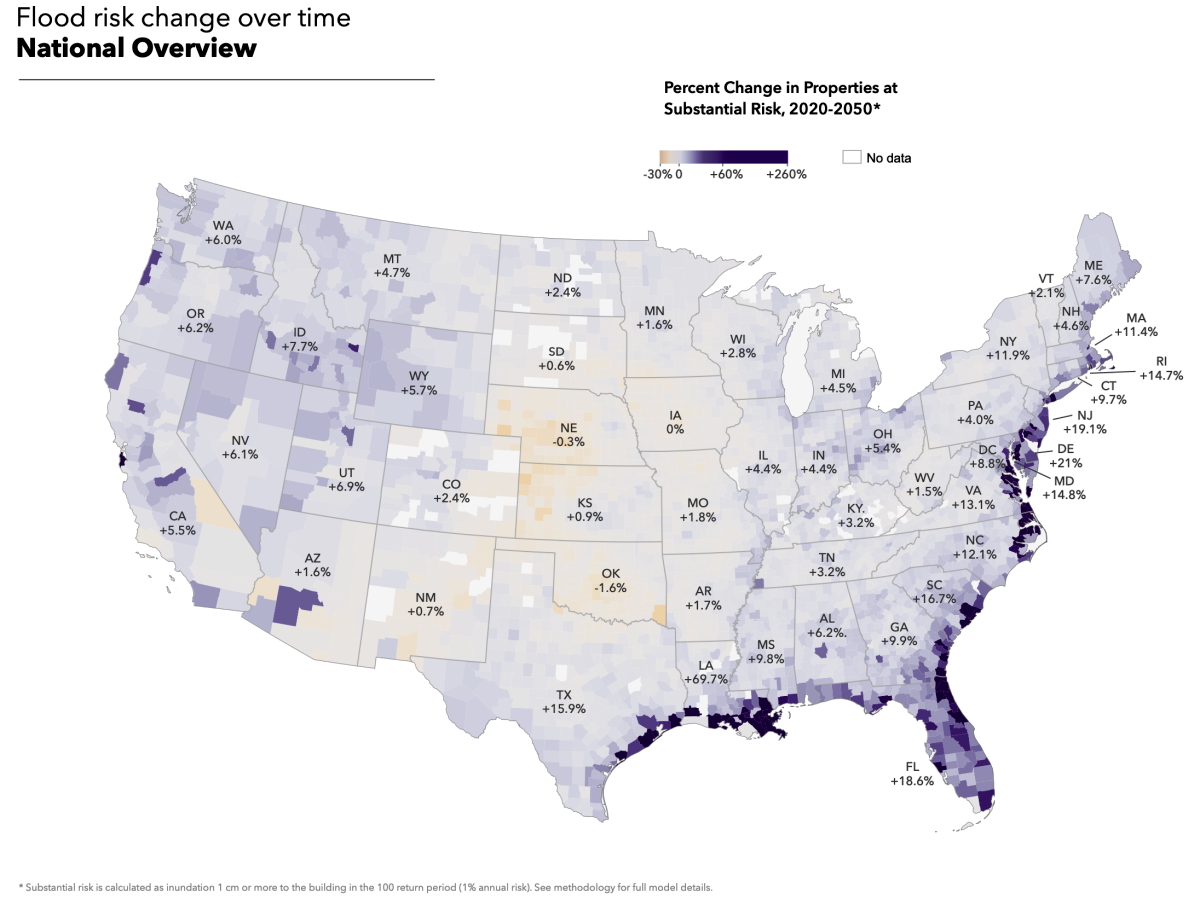 First Street found the Panhandle and West Texas have the state’s greatest differences now in the numbers of properties at “substantial” risk, compared to FEMA’s smaller numbers. About 30 counties in the nonprofit’s calculations for those parts of the state have at least eight times more properties in that risk category.

Corpus Christi is now 15th place nationally in the organization’s roster of cities with the most properties currently at “substantial” risk (22,857) and is projected to be in 14th place (25,442) in 30 years.

Including flooding at all levels of severity, Houston is the U.S. city with the greatest number of properties at risk now (186,481) and will continue to have the nation’s largest number in 2050 (202,317 properties, an 8.5 percent increase), First Street’s model indicated.

Because of its location near the Gulf of Mexico and low-lying terrain, Houston is vulnerable to flooding from tropical and inland-originating storms, both of which are projected to grow stronger due to climate change.

First Street provides a free online tool called Flood Factor, which provides a glimpse of all properties’ “past floods, current risks, and future projections based on peer-reviewed research from the world’s leading flood modelers.” The organization said the service can be used by individuals, government officials and industry leaders to understand and mitigate flood risks.

The NOAA report’s authors said that federal agency will be issuing annual and decade-length projections to help prepare for cumulative infrastructure damage caused by the rapid changes that are being recorded in coastal flooding due to sea-level rise.

Probably the nation’s best-known example of problems associated with increased high-tide flooding is Miami, where sea water routinely gets into storm drains and inundates downtown streets.

“These (tides) happen several times a year, and they can really cause problems for residents,” a Miami meteorologist told the Washington Post last year. “This is salt water mixed with sewage.”

In some locations around the country, including parts of Galveston behind that city’s famous seawall, water can reach the high-tide flooding threshold and cause underground infrastructure damage, such as infiltration of storm-water drainage systems, without visible flooding, NOAA said.

Noting Texas coastal sites’ especially large recent increases in days with high-tide floods, the report added that it is likely that rises in both sea levels and in occurrences of high-tide flooding “are affecting groundwater levels and contributing to poor coastal water quality along many Texas coastlines, which have showed elevated bacteria counts over the last year.”

Compared to readings in 2000, the greatest increases in the number of days with high-tide flooding were recorded at sites in Texas (chart below) and elsewhere in the western Gulf and were driven “in part” by a 0.5-foot rise in sea levels over that period, NOAA said. (The report authors said Eagle Point’s especially high number in 2019 was likely due to localized land subsidence.)

While human-induced climate change is unquestionably causing sea levels to rise, other factors such as variations in circulation patterns are also involved in the rates of increase in the Gulf, the Rice University oceanography professor John Anderson told TCN earlier this year.