The U.S. electric grid is uniquely susceptible to power outages, a problem expected to get worse with climate change. 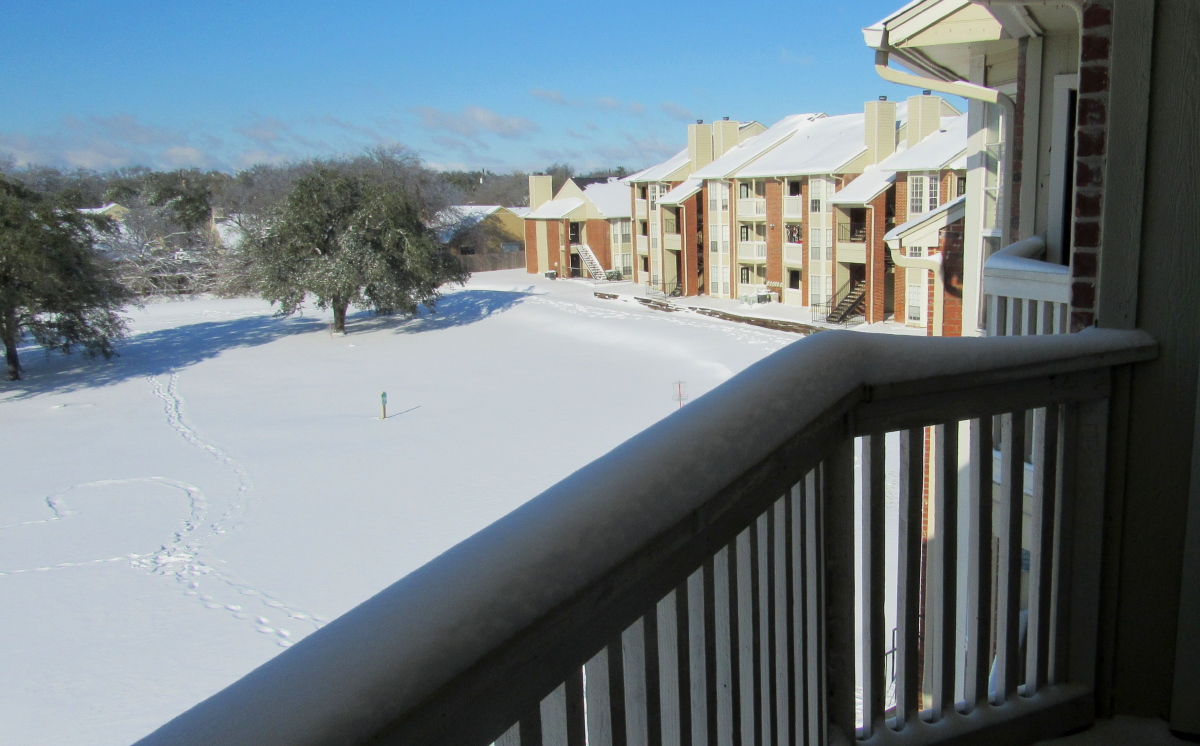 It wasn’t a torrid heat wave or a Category 5 hurricane that brought the Texas electrical grid to its knees on February 15. Instead, it was the most widespread and intense cold and snow in decades.

The frigid onslaught triggered a cascade of events that left millions of Texans shivering in the darkness of unheated, unlit homes. Temperatures sank well below freezing all the way to the Texas coast, putting Houston below 32 degrees Fahrenheit for nearly 48 hours and leaving countless records broken on the icy plains.

Many – including some prominent climate change contrarians – were quick to pin the “electric emergency” on the massive turbines that make Texas the leading U.S. state for wind energy. While the deep freeze did knock some turbines offline, practically every mode of energy supply was hobbled by the intense cold, snow, and ice.

The main cause of the massive disruption, by far, were the frozen components leading to the outage of thermal plants that heat water and convert the steam to electricity. The vast bulk of those thermal plants are powered by natural gas. In addition, a unit of the South Texas Nuclear Plant was thrown out of service Monday as a result of frozen pipes, which cut even further into the Houston area’s electricity supply. 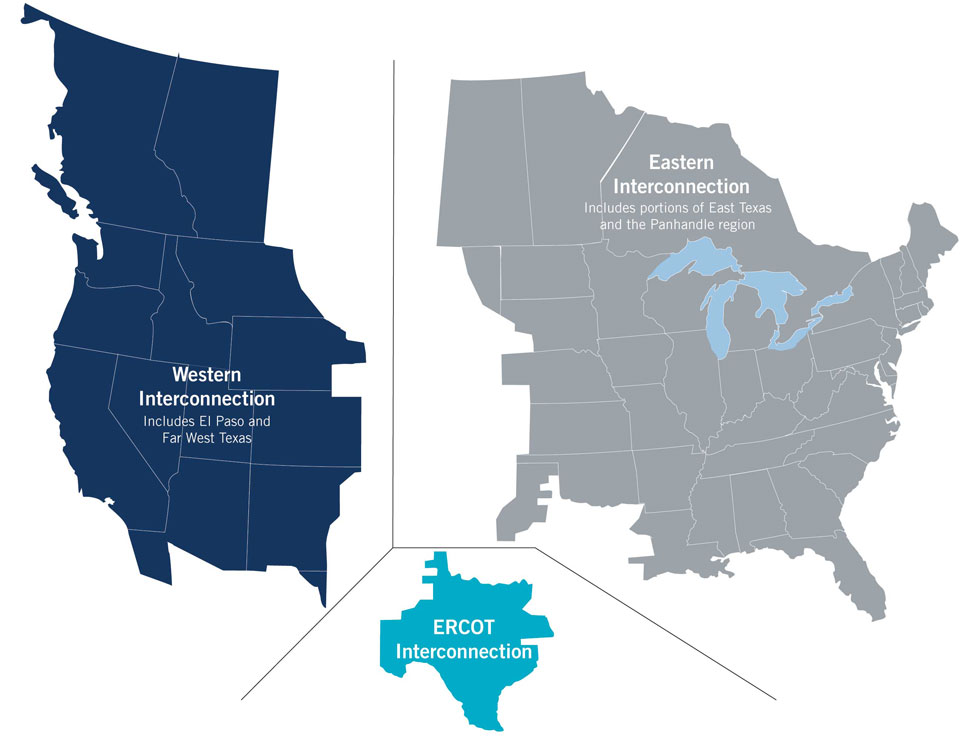 The three main components of the North American power grid are the Western and Eastern Interconnections and the ERCOT Interconnection, managed by the Electric Reliability Council of Texas and encompassing most of the state. (ERCOT)

Also feeding the crisis were several factors unique to Texas. Most of the Lone Star State is on a power grid that’s separate from the western and eastern U.S. grids, a decades-old bid to avoid interstate regulation but one that reduces the Texas grid’s flexibility. The state’s deregulated, just-in-time energy marketplace is also a factor, as it leans on production versus storage – a risk when natural gas lines freeze up – and it allows for massive price spikes during weather outages.

Investigations after similar but less-extensive Texas freeze disasters in 1989 and 2011 pinned much of the blame on equipment that was insufficiently protected against extreme cold, a threat that’s infrequent in Texas but notoriously brutal when it does arrive. “Many of the generators that experienced outages in 1989 failed again in 2011,” according to a report from the Federal Energy Regulatory Commission and the North American Electric Reliability Commission. 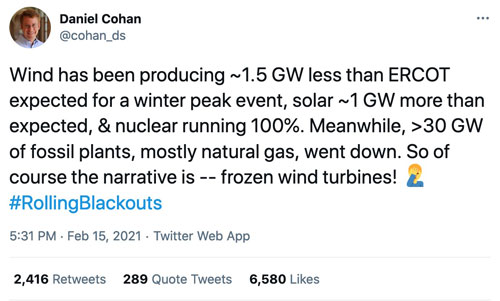 “I think the Texas freeze will become the new poster child for compound weather and energy disasters,” said atmospheric scientist Daniel Cohan of Rice University, who’s working on a book about energy and climate change. “The challenges faced this week will likely be studied for years to come, and they show how tough it is to achieve resilience in a changing climate during an energy transition.”

Overall, of course, the temperature trend points to more warming. In Texas and in most other U.S. locations, the coldest winter temperatures have been steadily rising, according to data compiled by the nonprofit science and communications group Climate Central. Yet a warming climate doesn’t preclude the occasional extreme wintry blast.

It’s also possible, though not universally accepted, that depleted sea ice and amplified Arctic warming are exacerbating at least some mid-latitude cold episodes, a topic of lively, ongoing research debate.

The week’s U.S. power woes extended well beyond Texas, the result of an unusually prolonged and widespread bout of frigid air and frozen precipitation. According to poweroutage.us, some 175,000 customers were without power in Oregon on the evening of February 16. They were joined by more than 200,000 customers in Kentucky and West Virginia, and 3.2 million customers still powerless in Texas.

To put it bluntly, this kind of situation doesn’t happen everywhere. In fact, it happens more often in the U.S. than in any other developed country, according to the University of Minnesota’s Massoud Amin, a founding expert in smart-grid technology. Amin has found that utility customers lose power for an average of 4 minutes annually in Japan, compared to 92 minutes per year in the Upper Midwest.

“We are behind all other G7 nations in our infrastructure, including the power grid,” Amin said.

One clear factor is America’s outsized crop of extreme weather. Another is the vast number of weather-vulnerable U.S. power lines that lie overhead, especially in older eastern cities. Nations such as Germany and the Netherlands prioritize burying power lines, a process that’s costly but that helps reduce the havoc resulting from extreme weather.

Between 2010 and 2019, the U.S. had an increase of 67 percent in major weather-related power outages (those affecting at least 50,000 customers) as compared to 2000-2009, as tracked by the U.S. Department of Energy (DOE) and analyzed by Climate Central. These outages cost an average of $18 to $33 billion per year, with the indirect costs much higher.

For 2020, DOE reported 118 major outages, the second-largest annual total this century. That ranks behind only 2011, a year with record tornado damage.

What’s more, the aging U.S. grid is being hit hard by compound weather disasters, those occurring near each other in time or space – or both. From the final week of October 2020 into early November, three far-flung areas experienced nine major outages, some lasting more than a week. The culprit was a strange juxtaposition of weather disasters that included an exceptionally early and destructive ice storm and a very late-season hurricane landfall.

How climate change is stressing the grid

Compound disasters are a topic of growing interest among researchers. They point out that the total impact of compound events can be much greater than the sum of their parts. For example, the nation’s limited supply of utility repair crews can get stretched beyond its ability to respond.

Climate change is already exacerbating some potential threats to the power grid: for instance, the ramped-up intensity of heat waves and the increased frequency of sprawling “stuck” weather patterns in summertime.

Colin Raymond of the NASA Jet Propulsion Laboratory is lead author on an essay published last summer in Nature Climate Change that delves into understanding and managing compound and connected weather and climate disasters. Raymond draws a distinction between compound weather and climate events – often linked to a single, persistent large-scale weather pattern – and connected events, which occur when compound events are “amplified by societal networks.” According to Raymond, the latter “leads to impacts that are larger or have a different spatiotemporal pattern than they would otherwise.” 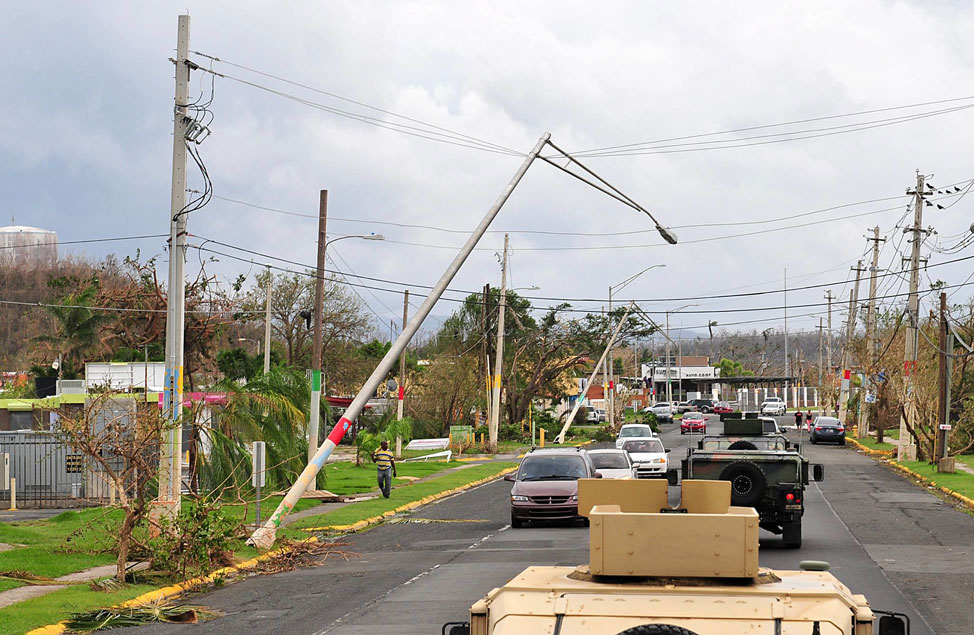 Damaged power lines were strewn across Puerto Rico on September 21, 2017, when a military convoy including Governor Ricardo Rosselló visited the cities of Loiza and Canóvanas to survey destruction left by Hurricane Maria. (1st Sgt. Waldemar Rivera, PRNG-PAO via flickr)

The coast-to-coast power outages of February 2021 are one example. In their Nature Climate Change essay, Raymond and colleagues highlight another: the sequential assault from hurricanes Harvey, Irma, and Maria within a month’s time in the summer of 2017.

By the time Maria struck Puerto Rico, the study noted, U.S. emergency response systems had been stretched thin by Hurricane Harvey striking Texas the previous month and Hurricane Irma hitting Florida the previous week. On top of Puerto Rico’s pre-existing vulnerabilities – including under-maintained infrastructure, limited budgets, an aging population, and lack of statehood benefits – relief supplies pre-negotiated by FEMA had been drained by Harvey and Irma. The agency rushed into new arrangements that were plagued with problems, including steep markups.

Scientists are exploring an array of new tools to help examine how compound and connected events are intertwined and how policymakers can unravel the knots. According to Raymond and colleagues, “impacts can serve as a winnowing device to identify what combinations of extreme events matter.” Emerging computational and communication technologies could also make a big difference, especially with the help of high-quality, fine-grained impacts data.

The most promising analog, according to Raymond and colleagues, may be in the spectacular progress of aviation safety. They call it a realm where “physical science, engineering, and social sciences have come together to successfully mitigate – despite greatly increasing system complexity – the frequency of disastrous failures.”

How to keep the juice flowing

As for the U.S. power grid, there’s no sign that weather and climate will be giving it a break anytime soon. With La Niña still in place, extended climate outlooks point to the potential for a drought-ridden spring across the western United States, perhaps extending into summer. In addition, tornadoes and hail tend to be more frequent in the southern Great Plains during La Niña springs, and La Niña often fosters an enhanced Atlantic hurricane season.

Texas’ electricity calamity of 2021 is bound to trigger debate on how to keep the evolving U.S. grid robust during various types of disasters, especially as the nation becomes more reliant on electricity that will increasingly come from renewable sources. De-icing systems and cold-weather lubricants are used in many wind turbines in northern climates. Over time, grid-scale battery storage for wind and solar energy could play a major role.

No matter how the sources and storage evolve, transmission and grid coordination are two Achilles’ heels that’ll have to be dealt with. Several companies are now using artificial intelligence to anticipate and track grid outages. In addition, decentralized microgrids could help distinct locations such as hospitals or college campuses keep the power going even during grid outages.

“We need a smarter, stronger, more secure grid,” said Amin, who chaired the board of the Texas Reliability Entity (the regional council for ensuring bulk power access) for seven years. “My hat is off to grid operators and utilities in Texas and elsewhere who are trying to keep up a system that was never designed to handle such contingencies. We need to help them make it stronger and more resilient.”

Collaboration among weather, climate, and energy researchers could also help ensure the grid is equipped to handle the mix of weather extremes that the evolving climate will be flinging our way.

“No infrastructural relic may be as vulnerable as the U.S. electric grid,” environmental scientist Urooj Raja of the University of Colorado Boulder wrote in a 2020 essay for The Hill. “As climate change escalates and disrupts weather patterns, our country must update the grid, immediately, or risk losing not only power, but lives.”

Related: A website about the U.S. electricity grid offers a mesmerizing way to pass the time productively

Bob Henson wrote this article for Yale Climate Connections. A meteorologist and science writer based in Colorado, Henson is the author of “The Thinking Person’s Guide to Climate Change.” He is a contributing editor of Texas Climate News.