In Texas, as elsewhere, cities are taking the lead in climate-energy action 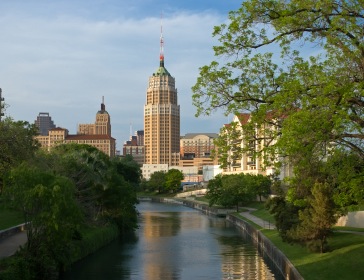 National climate-energy policy is stalled in Washington’s partisan gridlock. Texas proponents of cleaner energy are consoling themselves that at least they “dodged a disaster” in the Legislature this year. In other states, environmentalists have been battling efforts to make “historically large cuts to environmental programs.”

The picture is often different at the municipal level, however, as recent developments in Texas illustrated – particularly in San Antonio and Houston, the state’s second-largest and largest cities. [An early version of this article incorrectly stated that San Antonio is third-largest.]

San Antonio Mayor Julián Castro this week announced a suite of actions that he said indicate the Alamo City “has the opportunity to seize a mantle that no city in the U.S. holds today: to be the recognized leader in clean energy technology.”

At a time when the state government’s top elected officials question the science of manmade climate change and are challenging federal actions to limit that change, San Antonio’s announcement was notably different for its explicit pride in action that will cut climate-changing emissions.

A press release from CPS Energy, the city-owned electric and gas utility, included this passage:

“The CPS Energy Board of Trustees set aggressive goals several years ago,” noted Board Chair Derrick Howard. “In 2010, we raised expectations by asking staff to increase the utility’s renewable resources to 20 percent, or 1,500 [megawatts], by 2020 and have 65 percent of our generation resources be low- or no-carbon emitting. We believe the plan announced today can propel us to reach these goals.”

Houston Mayor Annise Parker, meanwhile, was named [PDF] last week as the top big-city winner of the 2011 Mayor’s Climate Protection Awards sponsored by the U.S. Conference of Mayors and Walmart. An independent panel of judges selected the winners to recognize “innovative practices in their cities that increase energy efficiency and reduce greenhouse gas reductions.”

[The five companies] will bring about 230 jobs to town in three years, CPS estimates, many of those in high-paying engineering, software and management positions. [CPS chief executive Doyle] Beneby has predicted that number will climb to as many as 1,000 as the companies expand and other opportunities arise.

Most will also invest in research partnerships with [the University of Texas at San Antonio’s] Sustainable Energy Research Institute.

“By building a critical mass around research and development that will grow and attract the brainpower of the 21st century, San Antonio can be for the new energy economy what Silicon Valley is to software and what Boston is to biotech,” Castro said.

The president of the U.S. Conference of Mayors, Burnsville, Minn., Mayor Elizabeth B. Kautz, said of Parker that her “efforts to improve the efficiency of the city’s building stock, both city-owned and privately-owned, is a very broad and bold undertaking, one that will substantially reduce energy use and associated carbon emissions.”

The conference summary of what the judges liked about Houston’s efforts:

The city has set forth a multi-year agenda to retrofit all 262 city-owned buildings, including fire stations, police stations, libraries and even performance halls, and has launched its Houston Green Office Challenge, including its Energy Efficiency Incentive Program, that challenges private commercial building owners/mangers and tenants to reduce energy use, among other objectives. For city-owned buildings, these improvements are expected to reduce energy use by 30 percent in more than 5 million square feet of office space. More than 330 private sector partners have already taken up the Green Office Challenge, with the city reimbursing building owners for 20 percent of materials and labor for qualifying improvements.

Other Texas cities, meanwhile, have been announcing their own cleaner-energy initiatives, including municipal solar projects in Harlingen and El Paso.

In the higher-profile cases of San Antonio and Houston, anyone who has followed municipal developments in recent years will know that the latest news reflected policy continuity from one mayor to the next.

A blog on the weekly San Antonio Current’s website noted, for instance:

It may smack sustainable-city leaders in such affluent locales as Berkeley, Portland, or Chicago as an upstart challenge, but on Monday San Antonio Mayor Julián Castro minced no words in declaring that the Alamo City is now officially gunning to be the nation’s top dog in clean-technology development. Castro told hundreds of influential guests at what can only be described as the largest, best-dressed press conference in recent memory, “San Antonio, it can be said today, is not a follower, it is a leader.”

This week the same can be said of Castro. Upon his 2009 election, the young mayor inherited a green-tech vision that had sprung out of the political vision of the [former Mayor Phil] Hardberger administration and was given validation and direction through the work and encouragement of influential consultant Jeremy Rifkin, but with a strike at dirty coal, commitment to additional solar, and the unveiling of a team of clean-tech companies coming to San Antonio, the dream of Mission Verde has became the sole property of Castro.

SolveClimate News, an online news outlet, posted a long article Wednesday about the city of Houston’s environmental efforts, which had this nod to Parker’s predecessor in the mayor’s office:

The drive to raise Houston’s renewable and energy efficiency portfolio began largely with former mayor Bill White, who served from 2004 through 2009, and who challenged incumbent Gov. Rick Perry as a Democratic candidate in the 2010 gubernatorial election.

Clean energy advocates see Houston as key to influencing the state’s clean economy due largely to its size. With 2.1 million residents, Houston has the highest city population in Texas and is the fourth most populous city in the nation behind New York, Los Angeles and Chicago.

As mayor, White signed a green building resolution to set a target for new construction projects to get LEED (Leadership in Energy and Environmental Design) certifications, and he started the Residential Energy Efficiency Program to weatherize more than 2,000 inner-city homes.

White contracted over 250 million kilowatt-hours of renewable energy for municipal use. In 2005, he set a goal of having 50 percent of the city’s non-emergency fleet be hybrid cars.

Such programs by some Texas cities reflect a continuing trend across the country, according to a survey [PDF] commissioned by the U.S. Conference of Mayors, which was conducted in April and May.

“Despite challenging economic conditions, a landmark survey of nearly 400 mayors in all 50 states has found that energy and sustainability efforts have maintained momentum within cities,” the organization said in announcing the results at its annual meeting last week.

The mayors’ conference said these items were among the key findings:

Houston is also one of the 40 large cities around the world participating in the C40 Cities Climate Leadership Group, launched by former President Bill Clinton’s Clinton Climate Initiative, which helps cities cut energy use and greenhouse gas emissions.

Earlier this month, at a mayors’ summit in Brazil, the C40 group released research on large cities’ roles in contributing to, and taking action against, manmade climate change.

The findings of the two studies included the calculations that the 58 cities associated with C40 (the 40 “megacities” plus 18 affiliated cities worldwide, which include Austin) are home to one in 12 of the world’s people and account for 12 percent of its carbon dioxide emissions.

The researchers observed that mayors in the megacities are exhibiting “strong leadership” in the climate arena, implementing 4,734 “climate change actions.” They noted that the 40 mayors “have the greatest power to cut greenhouse gas emissions in the areas of energy demand in buildings, transportation and waste management.”