Factors behind the beautiful creatures’ decline range from climate change to degraded habitat. Their immense migration traverses Texas. “What happens in Texas affects the rest of the breeding range,” one researcher says. 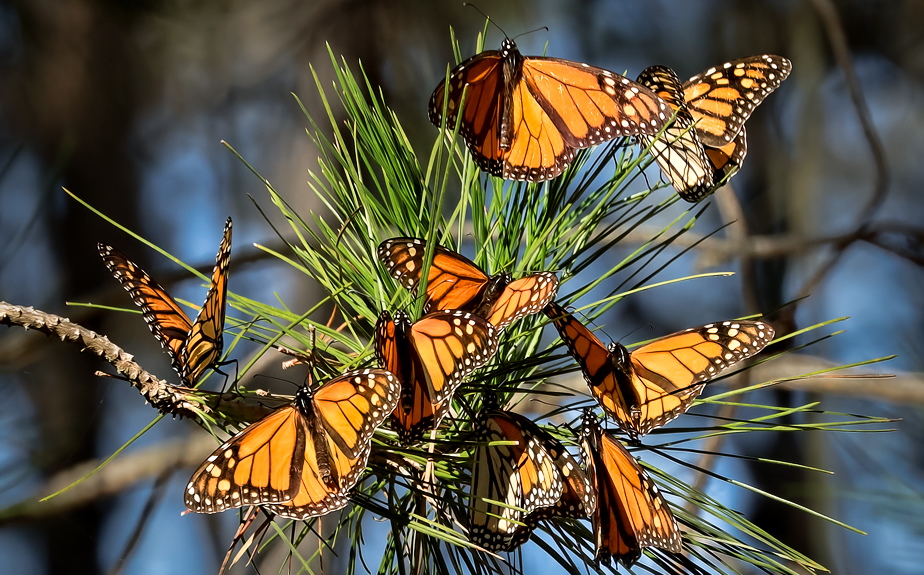 Twice each year, Texas is witness to one of nature’s most remarkable – and most threatened – spectacles. Millions of orange and black monarch butterflies pass through the state on the species’ multigenerational spring and fall migrations that span thousands of miles.

In the past 20 years the population of the eastern North American monarch butterfly has decreased by more than 85 percent, according to a study published in the journal PLoS One in July 2019. The western North American monarch declined by more than 95 percent. A combination of climate change, habitat degradation and agricultural practices is to blame, all factors that show no signs of going away.

In fact, things keep getting worse for the iconic species. Since the first of this year, federal officials re-approved glyphosate, the chemical used in Bayer’s Roundup weed killer linked to loss of milkweed, essential for monarchs’ survival. And the bodies of two staff members at a monarch sanctuary in Mexico were found within weeks of each other, both with signs that they had been violently killed.

The Eastern population of monarchs spends winters in southern Mexico and migrates through the central U.S. between that winter habitat and summer territory in southern Canada. Its survival depends upon conditions along the entire route, Larry Gilbert, director of the Brackenridge Field Lab at The University of Texas, told Texas Climate News.

“Every monarch butterfly coming from Mexico is going through Texas,” Oregon State University researcher Tyson Wepprich, lead author of the PLoS One paper, pointed out in an interview with TCN. “So what happens in Texas affects the rest of the breeding range.”

Females that overwintered in central Mexico lay eggs in northeastern Mexico and South and Central Texas in spring, and those offspring continue the cycle as they head north, with subsequent generations eventually venturing as far north as Canada.

Monarchs lay their eggs only on milkweed plants, but in many areas, urbanization and agriculture have all but eliminated these plants, Gilbert says. In South Texas, African grasses introduced for grazing have crowded out native grasses and milkweed on rangelands.

People and organizations planting milkweed for monarchs may do more harm than good, however, as tropical milkweed (Asclepias curassavica) can interrupt monarch migration by blooming later into the fall – an effect that could become worse in a warming climate. Nursery-bought tropical milkweed also may contain residues of pesticide in amounts harmful to monarchs.

“The overall population dynamics of monarch butterflies may be the cumulative result of many regional stressors,” Gilbert says.

With more than 95 percent of the land in Texas in private hands, it is difficult to determine how well those areas support migratory monarchs, he adds.

“My view is this: When managing for wildlife became equivalent for [purposes of] tax relief to cattle ranching in the 1980s, many owners chose to emphasize hunting over livestock.

“Without grazing pressure, introduced grasses began to dominate. In a region once shaped by vast bison herds and natural fires, a decline of large grazers seems likely to be a negative factor for monarch butterflies.

“This is but one reason that a major focus of our invasive species program at Brackenridge Field Lab is on finding ways to control unwanted spread of introduced exotic grasses that are now degrading Texas ecosystems.”

In addition to decreased availability of native milkweeds, pesticide use likely plays a role in the decline of monarch populations, according to the Xerces Society, a nonprofit organization that promotes the conservation of pollinators and other invertebrates.

Globally, we now use more pesticides than at any time in human history, in both agriculture and urban and suburban areas. A recent study by Xerces and the University of Nevada at Reno found multiple pesticides in milkweeds from all land-use types, even where there was no known pesticide use.

Over the long term, saving monarchs also requires lowering greenhouse emissions to mitigate the effects of climate change and finding ways to help the species adapt to those impacts.

Monarchs encountered drought in many parts of Texas on their southward migration last fall, the time of year when the butterflies need to build up fat stores that get them through the winter in Mexico. Studies have indicated that unfavorable conditions along the route affect the number of butterflies reaching Mexico overwintering grounds, as well as how many actually survive the winter.

Finally, conservation experts say we must protect the people who protect the butterflies.

The Monarch Butterfly Biosphere Reserve in central Mexico was inscribed on the United Nations Educational, Scientific and Cultural Organization’s (UNESCO) World Heritage List in 2008. A guide at the reserve, Homero Gómez González, disappeared Jan. 13, and authorities found his body floating in a well in the community of El Soldado de Ocampo near the sanctuary on Jan. 29. Another guide, Raúl Hernández Romero, disappeared Jan. 27 and was found dead on Feb. 1, his body badly beaten.

Authorities have not officially made any connection between the two deaths or between the deaths and the work the men did in environmental conservation.

UNESCO issued a statement after the deaths that said, in part: “The protection of this natural World Heritage is essential in response to the global climate crisis and is becoming more and more difficult every day, in Mexico and in many other regions of the world. UNESCO reaffirms its commitment alongside the managers of World Heritage sites and all those in institutions and civil society who are fighting to preserve the integrity of our natural heritage in the face of the worrying degradation of global biodiversity.”

The monarch reserve provides a sustainable source of income for surrounding communities and has helped put a stop to illegal logging. Some conservationists worry that gangs tied to illegal loggers may have targeted the men for their support of ecotourism over selling timber. News of the deaths could discourage tourists from visiting, eroding support for ecotourism and reducing local incomes, which could make the area more vulnerable to illegal logging.

In addition, climate change threatens the fir trees where monarchs roost in Mexico, and some scientists predict the trees could disappear by the end of the century. It seems monarchs just can’t catch a break.

Want to help? Biologists offer a variety of recommendations, including these: Plant native milkweed species and native flowering plants (which adult monarchs need for food). Avoid use of herbicides and insecticides. Report sightings of monarchs in spring and fall.

Reports to Journey North at the University of Wisconsin, for example, make the information publicly available so scientists can use it in their research and monitoring. Anyone can participate in the crowd-sourced citizen science effort, says program coordinator Nancy Sheehan. Instructions are simple, and observing does not require intensive training or a significant time commitment.