Health after Harvey: The lingering stress and distress of a major hurricane 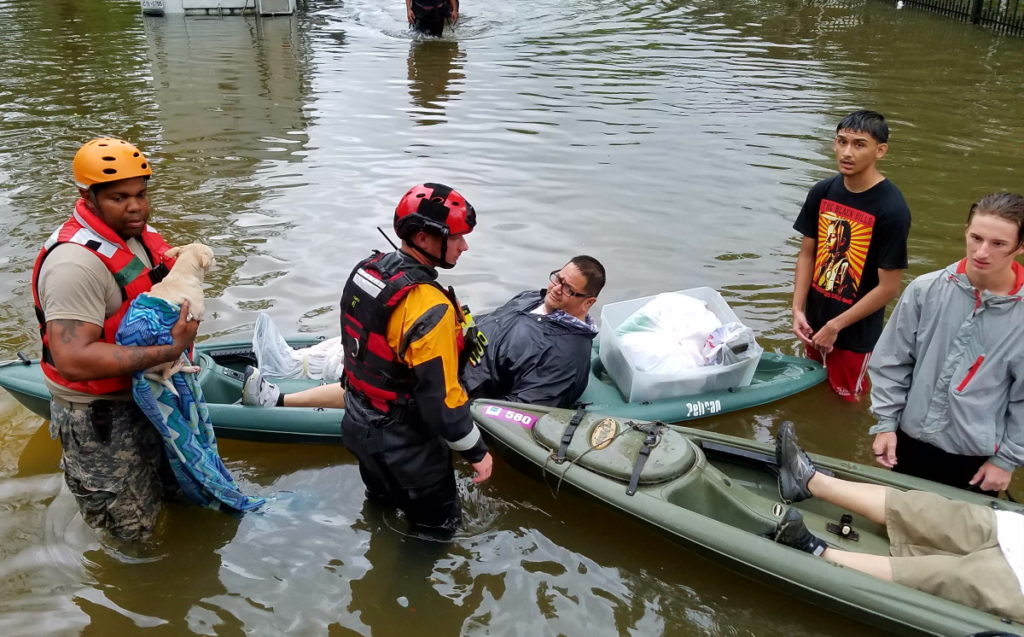 Hurricane Harvey’s unrelenting rains started on Aug. 25, 2017 and continued in Houston for four days, dropping 50 inches of rain or more. It caused 36 deaths in Harris County, core of the Houston region, and at least 68 statewide. Across the coastal and near-coastal areas of Texas hit by the storm and subsequent flooding, damage totaled an estimated $125 billion, much of it in Harris County.

With more than 60,000 people rescued in Harris County and 30,000 in temporary shelters, Harvey affected the lives and emotional health of most of the population. In general, the problems were short-term and acute. The most vulnerable, however, can still feel the impact of that devastating storm. Harvey scarred the psyches of young and old.

Mary can attest to that. She watched her pre-teen granddaughter staring out the window at the river of water rushing past her home in a historically African-American neighborhood that was hit especially hard by Harvey. They were marooned for three days as the water started to seep in until it climbed six inches up the walls. (We are not using Mary’s real name to protect her grandchildren’s privacy.)

“We’ve had storms before,” said Mary. “But with Hurricane Harvey, it was the first time water came into the house.” Eventually, she, her granddaughter and teenaged grandson had to leave the house. Soon, she noticed that her granddaughter was different.

“She got so mean. Everything got on her nerves,” Mary said. The granddaughter was just visiting for the summer when the storm struck, but when she got home, grades for the mainly A student dropped. When her father brought her back to Houston from their home in another Texas city, she became agitated as they drove through a rain shower not far down the road. After the grandmother talked her son into leaving the child with her in Houston, she took her to a local pediatrician. There, the youngster said she felt like cutting her throat.

The pediatrician insisted on hospitalizing the little girl, beginning a long cycle of hospitalization, medication and attempted suicide. The stress on the grandmother grew as she struggled to help her granddaughter, keep her grandson’s education on track and repair her damaged home.

In the December 2017 report “An Early Assessment of Hurricane Harvey: Impact on Vulnerable Texans in the Gulf Coast,” researchers tasked by the Houston-based Episcopal Health Foundation and the California-based Kaiser Health Foundation estimated that one in six people in the 24-county region affected by Harvey had a new health condition after the storm, or an existing health condition had gotten worse in that time.

In a followup report, “One Year After the Storm: Texas Gulf Coast Residents’ Views and Experiences with Hurricane Harvey Recovery,” the same researchers found “that while about three in 10 affected residents report declines in their own mental health as a result of Harvey, just 8 percent say they or someone in their household has received counseling or mental health services since the storm. In addition, one in six say someone in their household has a health condition that is new or worse as a result of Harvey, and 16 percent say they need help getting health care for themselves or their family.”

•After the hurricane, some with pre-existing mental conditions came in for a prescription refill.
•A second group said they previously had taken anti-depressants and now thought they should start again.
•Another group reported sleeplessness, anxiety and depression as a new symptom.

Those groups include adults and children, who will not tell you they are depressed or unable to sleep, said Shah, who is also chief of psychiatry at the county-operated Harris Health System’s Ben Taub Hospital. Children act out their stress by poor school performance or misbehaving in class. To help school officials identify the problems, he helped set up a four-hour workshop on how to identify the warning signs in children.

The percentage of people who were still out of their homes a year after Harvey was significant, he said. That can contribute to the prevalence of mental health problems.

Ongoing financial and logistical problems can exacerbate post-traumatic stress syndrome, or PTSD. Six months after the storm, questionnaires found that people were more likely to be depressed and have PTSD, a problem that is still evolving, said Dr. Joann Schulte, chief physician at the Houston Health Department.

“The first shock is that your house is under water and your car is gone,” she said. Six months or a year later, that person may not have the financial resources to redo the house, which causes a whole new set of problems, she said.

Research “done 10 to 15 years ago shows that bankruptcy rates increase after a natural disaster,” she said. “People who are poor have more problems recovering. If they lost a rental unit, their rent goes up and they get on a treadmill of poverty. For kids, it is important to have a parent who is good at thinking of new ways to skin a cat. Studies of the children of Katrina show they do fairly well if they have resourceful parents. The others go downhill.”

Efforts to understand the long-term effects of Harvey are ongoing with the Hurricane Harvey Registry, which allows those who lived through the storm to describe their experiences. It is operated by the Children’s Environmental Health Initiative at Rice University in cooperation with the City of Houston Department of Health and other local health and environmental agencies.

In the “One Year After” report, released in February 2019, the Kaiser Family Foundation and the Episcopal Health Foundation sought to survey residents in the 24 worst-hit counties on the Gulf Coast to provide information about the progress being made and the viewpoints of residents hurt by Harvey. Researchers placed the counties in four groups for their assessment: Houston/Harris County, counties bordering Harris, the Golden Triangle area, and counties to Houston’s southwest, including Corpus Christi and heavily hit Rockport.

That report found that residents affected by Harvey who were black, low-income or lived in the Golden Triangle of Southeast Texas (an area bounded by Port Arthur, Orange and Beaumont) were more likely to say “their lives are still disrupted and less likely to say they are getting the help they need with recovery.”

That finding was echoed in the Hurricane Harvey Registry. Forty-four percent of the 9,798 residents whose responses were captured in the project’s first report revealed that their homes were flooded, and 55 percent reported some home damage. Forty-six percent reported having to be out of their homes at least 20 weeks. While Harvey’s floodwaters swamped the lives of both rich and poor, those with a money cushion recovered more quickly. Nearly two years later, some of the poorest found themselves still putting their lives back together.

Mary receives a disability pension from her government employment and supports her grandson with Social Security benefits for his developmental disability. She has lived in her home since 1960, watching generations come and go. After Harvey, six inches of water left a covering of mold throughout those rooms. Waves of helpers came through, stripping her home to the studs.

In that time, she and her grandson lived in a hotel room paid for by federal emergency funds, then in her car, and finally, in a rental home not far from her own while the construction there was under way. A grant from a public charter school, which had educated her grandson, not only bought the materials and labor needed to repair her home, but also provided an overseeing contractor.

At the same time, she was trying to get her granddaughter into the right hands to help her handle the lingering emotional and mental distress the storm had wrought. Today, her home is mostly restored, but problems remain with the foundation. Her granddaughter still deals with the hurricane’s consequences for her emotional health, but she is getting the help she needs, mainly because of her grandmother’s persistence.

Their continuing struggles illustrate a point that the researchers at Rice’s Children’s Environmental Health Initiative made in their initial report about the Hurricane Harvey Registry:

“More than 10,000 rescue missions were conducted, $125 billion worth of damage was reported and over 700,000 residents registered for Federal Emergency Management Agency assistance. These figures are moving, but do not capture the full range of experiences throughout Southeast Texas. From Houston to Bay City, from Fort Bend County to Galveston County, individuals and communities have been forever changed.”

Related: Health after Harvey: Some physical problems persist, others are undefined